We compost everything else in California. Why not dead bodies?

By THE TIMES EDITORIAL BOARD

Addressing climate change doesn’t just mean taking cars off the roads and shutting down coal-burning plants. It requires rethinking everything humans do that contributes in ways large and small to our carbon footprint. That includes how we travel to work, what we eat for dinner, what household products we buy and even what’s done with our bodies after we shuffle off this mortal coil.

That’s right. Death too comes with environmental consequences that can continue to affect the Earth’s livability for years to come. 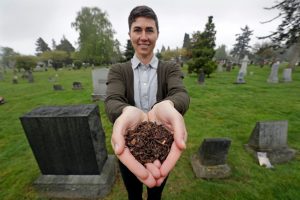 Burial in a cemetery often means injecting toxic chemicals into the body before it is placed in a casket made of hardwood harvested through deforestation. Cemeteries use water to keep the grounds green and may use pesticides and chemical fertilizers.

Interment is also increasingly expensive, especially in places where land is scarce or pricey. That’s one of the reasons cremation has become more popular in the United States than traditional burial in a casket. Slightly more than half of all deaths in the U.S. conclude in cremation, and that rate is projected to grow to nearly 80% by 2040, according to the National Funeral Directors Assn.

But cremation leaves a mark on the environment too. Although cremation rates vary globally — for example, in Japan it’s close to 100% — overall the practice produces 6.8 million metric tons of carbon dioxide every year. That’s a small fraction of the global greenhouse gas emissions, but every little bit matters. Cremation facilities have also been implicated in mercury pollution from vaporized dental fillings.

So what are environmentally minded people to do with their bodies once they no longer need them? There are a number of slightly greener options to meet the growing interest, such as burial without preservatives or in fully biodegradable shrouds or caskets. Someday people may even have the option of placing their departed loved ones in a biodegradeable pod over which a tree, rather than a headstone, is planted. Later this year Californians will have another eco-option called alkaline hydrolysis, which uses water, lye and heat to break down the body.

But there’s one environmentally friendly choice that isn’t yet available for Californians and should be: natural organic reduction or, basically, above-ground human composting.

Washington legalized this new procedure this year, becoming the first state to do so. And in California, Assemblywoman Cristina Garcia (D-Bell Gardens) is leading the effort to do the same by creating a licensing path for facilities that want to offer human composting services to Californians. Such services are not outlawed exactly at the moment; they’re just not specifically listed as one of the allowed methods of body disposition under the state’s Cemetery and Funeral Act. Lawmakers in Colorado are considering doing the same.

The idea was pioneered by Katrina Spade, a Seattle resident who was inspired by a decades-old agricultural practice to dispose of dead livestock. Spade’s company, Recompose, successfully tested the process with researchers at Washington State University (using six donated cadavers) and is now building the first human composting facility in the state of Washington.

As Spade describes it, bodies will be tucked into tubular steel vessels atop a layer of wood chips, alfalfa and straw and then covered with the same material, which creates the right conditions for microbes to heat up to 150 degrees and break down the body completely, including the bones, teeth and hair. The microbes’ work will also neutralize pathogens. The vessel will be aerated and rotated, and after 30 days all that will be left, other than the non-organic material such as tooth crowns, is a fluffy material that resembles soil and can be used in the garden.

It may sound ghastly, but it’s not all that different from what goes on in any backyard compost container, assuming body composting is done properly. And it has a much smaller carbon footprint than burial or cremation, Spade says. It’s worth remembering, too, that bodies in caskets don’t remain pristine as the years pass. Not to put too fine a point on it, but they rot.

Admittedly, body composting may not be for everyone. The Catholic Church, for one, is opposed to human composting, arguing that it is disrespectful. That’s fine. Catholics can still choose burial for their departed loved ones. But for those who don’t have religious or philosophical objections and who care about how their afterlife may impact the ongoing lives of those they leave behind, human composting should be an option.